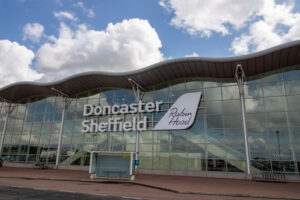 Bosses at Doncaster Sheffield Airport have announced it must close at the end of next month after the business was declared ‘unviable’ – leaving about 800 jobs at risk.

Managers at the regional terminal, serving 1.4 million passengers a year across 54 destinations, had been in talks with government officials about a rescue plan.

But a spokesperson for the groups said these hadn’t delivered ‘any tangible results’, and following a strategic review, the business was declared ‘unviable’.

Bosses will be ‘winding down’ their operations as the airport prepares to close at the end of October this year.

This comes despite the fact Liz Truss vowed to save the airport as part of the levelling-up campaign in her first prime minister’s questions as she said regional airports – including Doncaster Sheffield – ‘are a vital part of our economic growth’.

The new PM told the House of Commons she would make sure the new transport secretary, Anne-Marie Trevelyan, was ‘immediately on to this issue…to make sure we do protect this airport and we protect that vital infrastructure and connectivity that helps our economy grow’.

Speaking about the decision Robert Hough, Chairman of Peel Airports Group, said: ‘We recognise that this will come as a great disappointment to many.

‘The intractable problem remains the fundamental and insufficient lack of current or prospective revenue streams, together with the airport’s high operating costs.

‘Our employees have always been DSA’s greatest asset, and we are grateful to them all, past and present, for their dedication and diligence over the years.

‘The immediate priority remains to continue engaging closely with them over the next few weeks.

‘As such, DSA will now begin a formal process of consulting with team members.’

A spokesperson for Peel Group said they had been ‘actively engaging’ with a range of government officials on a ‘weekly basis’ about the future of the international terminal.

They said these talks were primarily led by officers at Doncaster Council, South Yorkshire Mayoral Combined Authority (SYMCA) and the Department for Transport.

And on Friday they said they’d received a proposal to provide the business with public money to cover losses incurred until October 31, 2023.

But the board later decided it could not ‘responsibly accept’ the funding amid a backdrop of its ‘unviable, loss-making operating business.’

Robert Hough added: ‘We will do everything we can to minimise the impact of these proposals and work closely with local authorities and agencies to support our employees through what we know will be an extremely difficult period.

‘DSA has remained in contact with union representatives on site throughout and we are committed to ensuring they are updated through every step of this next phase.’

However, speaking this morning, South Yorkshire’s Mayor Oliver Coppard said the council was still trying to demonstrate there was a ‘viable future’ for the airport.

He said: ‘We’re doing everything we possibly can to save our region’s airport.

‘We’ve taken the initiative, gone out to the market and brought potential investors to the table, demonstrating that there is a viable future for DSA.

‘But it has become clear that any deal to find a new owner or operator for DSA cannot be done in weeks.

‘That’s why over the past few days we have made an offer to step in with financial support for DSA.

‘This is not just about giving potential investors a sensible amount of time to put their proposals together, but also about protecting more than 800 jobs and providing certainty to customers, operators and our community at Doncaster Sheffield Airport.

Mr Coppard said: ‘I’m devastated by today’s announcement by Peel and angry about the impact it will have on our communities.’

The Labour mayor said the DSA had received public money for years, including through the pandemic, and an offer to continue that support has been rejected.

He said: ‘The fact that they chose to turn our offer down simply confirms what many of us suspected: that Peel was never serious about finding an alternative and safeguarding the future of DSA.

‘It is still not too late for them to do the right thing; for them to reconsider their decision for the sake of those employees, businesses and communities directly impacted by this appalling decision.’

Mr Coppard said the next step would be to ask the Government to step in and keep the airport open.

Peel said it had received a letter from the mayor’s office earlier this month, saying a group interested in buying the airport had come forward, but the firm had not received any more details about this potential purchaser.

Steven Underwood, Peel Group chief executive, said: ‘We will not accept any public sector grant to cover the costs of an airport that is not viable due to its lack of adequate forward revenues and high operating costs.’

Mr Underwood said the focus would be in developing Peel’s £1.7 billion GatewayEast site next door to the DSA.

He said: ‘We have the potential to attract cutting-edge, future-tech businesses to South Yorkshire, but only if we are able to collaborate with our local stakeholders and community in South Yorkshire.’

The airport opened in 2005 after it was converted by Peel from the old RAF Finningley airbase.

In the summer, the owners said that DSA had never achieved a critical mass of passengers to become profitable.

Once Wizz Air withdrew from using the airport, it was left with Tui as its only base carrier.

Commenting on the announcement, Beckie Hart, CBI Director for Yorkshire & Humber said: “The closure of the Doncaster-Sheffield Airport will be a serious blow for the economy in our region. Whilst we continue to hold out hope that a buyer can still be found, we must plan for other eventualities to safeguard South Yorkshire’s future prosperity.

“Our thoughts will be with those who will be put out of work. Local authorities, government and businesses will need to work hard to ensure there are opportunities out there and to retain many highly skilled individuals within the region.

“The airport has been a vital asset for firms and for jobs, with many wider economic benefits for households and businesses. In order to secure the economic future of the region, last week’s announcement of the Government’s Growth Plan provides an ideal opportunity to explore the possibly of bringing the Investment Zone initiative to Doncaster. This would attract new jobs, unlock investment and power future economic growth.

“The CBI will work with government and all stakeholders to keep attracting inward investment and create opportunities for people.”

Read more:
Doncaster Sheffield Airport is closing with the loss of up to 800 jobs