No 10 plans VAT cut to ease pain of rising prices 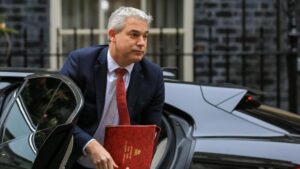 A cut in VAT has been proposed by No 10 to curb inflation and help households with the cost of living crisis.

Steve Barclay, the prime minister’s chief of staff, suggested reducing the 20 per cent headline rate of the tax, proposing that a temporary cut would reduce the tax bill for millions and ease inflation, which is at 9.1 per cent — the highest for 40 years.

However, the Treasury is concerned about the cost of the move and has warned that it could ultimately fuel inflation by overstimulating the economy. It has also raised the point that it would benefit wealthy households as well as poorer ones.

Cutting VAT to 17.5 per cent would cost the government about £18 billion.

The prime minister is under mounting pressure from Tory MPs to make good his pledge to reduce the tax burden, which is on course to reach the highest level since the 1940s.

People are being pulled into the higher band after Rishi Sunak, the chancellor, froze the top rate of income tax. Economists have suggested that the freeze, which has been described as a “stealth tax” by critics, could raise as much as £21 billion for the Treasury.

Johnson has repeatedly promised to cut taxes. He has told Tory MPs that they are the “biggest single household outgoing” and said the tax burden “must” and “will” come down.

However, his backbenchers are growing impatient and have called on him to give tax cuts priority over infrastructure spending.

Cabinet ministers are privately urging Johnson to fulfil his pledge as soon as possible. One said that he needed to “electrify” voters with an offer that saved people thousands of pounds. A change in VAT, which is levied on most goods and services with exceptions such as food and children’s clothes, is one option under discussion.

It is understood that Barclay raised the idea of cutting the tax during discussions with the Treasury over the past fortnight. He suggested that it would be “de-inflationary”. A source familiar with the discussions said: “Steve’s been pushing it quite strongly but the Treasury is not buying it.”

Another source said a potential VAT cut was discussed by Treasury officials last month before they decided against it. There were concerns that it could lead to a temporary fall in inflation followed by a longer, deeper recession.

Paul Johnson, head of the Institute for Fiscal Studies, said cutting VAT would be “economically inappropriate”, adding: “It would reduce inflation in the short run because it would reduce prices relative to what they would have been. But it would increase inflation next year. It can’t help in the long run.

“And it could actually lead to higher inflation overall because you would be pumping extra money into an economy where demand is already outstripping supply. Stimulating demand at the moment would be economically inappropriate. On this one the Treasury is right.”

Alistair Darling, a former Labour chancellor, cut VAT from 17.5 per cent to 15 per cent immediately after the financial crisis in 2008. The approach was credited with helping the economic recovery.

However, Paul Johnson said: “A financial crisis was leading to an increase in unemployment and a fall in living standards. Inflation was not the issue. A VAT cut then was appropriate. At the moment ramping up demand when there are clearly supply-side constraints has the potential to make that more problematic.”

A source close to Barclay said: “Steve has reinforced to ministerial colleagues that decisions on tax need to be taken by the prime minister and chancellor and that in exploring options, colleagues need to follow up on the commitments the prime minister made in his letter to MPs at the time of the leadership vote.”

The prime minister said in his letter to Tory MPs on the day of the confidence vote last month: “We will of course devote all our energy to reducing the biggest single household outgoing of all — the tax bill. It must come down, and it will, because that is the best way to deliver the growth we need.”

Martin Lewis, the founder of MoneySavingExpert.com, warned that there was a risk of protests, strikes and even riots if energy bills continued to rise and the government did not provide more financial help.