Skip to content
Homepage World News Rothbard vs. the Religion of Progressivism 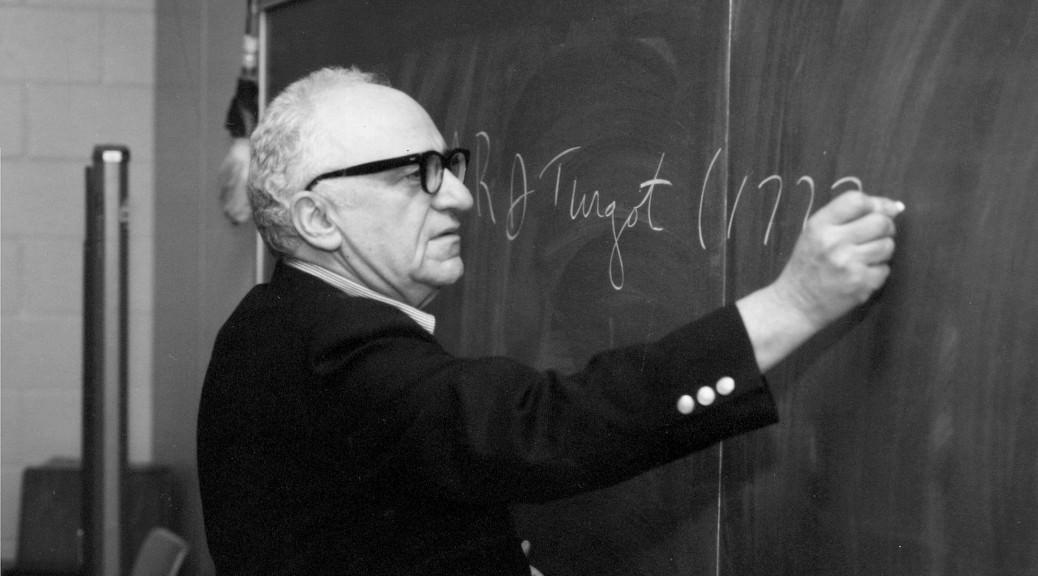 Rothbard vs. the Religion of Progressivism

Our main text for the Rothbard Graduate Seminar this week is Murray Rothbard’s Power and Market: Government and the Economy, which contains a systematic treatment of one area of economic theory, interventionism. This represents a departure from past seminars in an important respect. Earlier seminars focused on texts by Mises or Rothbard that addressed a much broader scope of their thought. Previous seminar texts such as Man, Economy, and State and Human Action cover the entirety of economic theory. Human Action, in addition, features a full treatment of methodology as well as discussions of epistemology, political philosophy, and economic history. Other texts used at earlier Rothbard Graduate Seminars such as The Ethics of Liberty and Economic Controversies are also broad in scope, containing, respectively, Rothbard’s systematic presentation of his political philosophy and a broad spectrum of his essays on theoretical and applied economics.

This week’s RGS deliberately focuses on the much narrower topic of interventionism, because it is the economic program of progressivism, the prevailing ideology of the twenty-first century. Progressivism attained this position after a leftist “long march” through Western educational, cultural, religious, economic, and political institutions, which began shortly after World War II, gained momentum during the 1960s, and rapidly accelerated in the 1980s. In a prescient memo written shortly after the war, Ludwig von Mises pointed out that the essence of the progressive policy agenda is interventionism. Mises called the teachings of progressives, “a garbled mixture of divers particles of heterogeneous doctrines incompatible with one another.” He included Marxism, British Fabianism, and the Prussian historical school in this doctrinal witch’s brew. Whatever the differences among them, however, all progressives were passionately united on two points. First, they believed that “contradictions and evils are . . . inherent in capitalism.” And second, they argued that the only way to root out the inequities and irrationalities of capitalism and transform it into a more humane and rational system was by imposing the program of interventionism laid out by Marx and Engels in The Communist Manifesto. As Mises pointed out, “the Communist Manifesto is for [progressives] both manual and holy writ, the only reliable source of information about mankind’s future as well as the ultimate code of political conduct.”

To be clear, the gradualist, interventionist path to socialism laid out in The Communist Manifesto was explicitly rejected in the later writings of Marx as “petty-bourgeois nonsense.” The later Marx advocated permitting the conditions of revolution to ripen until the continuing immiseration of the workers, worsening economic crises, and concentration of capital in fewer and fewer hands caused the proletariat to rise up and destroy the capitalist system in one mighty blow. Although embracing Marx’s ultimate goal, progressives thus differ from full-blooded Marxists in choosing the nonviolent, gradualist route toward socialism via interventionism, the mixed economy, democratic socialism, or whatever you wish to call it. Some progressives view interventionism as a method of subverting capitalism and achieving full socialist central planning. Others—probably the majority today—see interventionism as the means for taming and humanizing capitalism and seek to foist it on the productive class of workers and entrepreneurs as “a permanent system of society’s economic organization.” But the difference between these two variants is beside the point. Regardless of the precise long-run goal of their proponents, interventionist policies have the same effects. They distort market prices, misallocate resources, stifle and misdirect entrepreneurship, destabilize the economy, and redistribute income from the producers to the parasitic ruling elites and their constituencies and cronies.

Why have I called out progressives in particular when there are many political ideologies that advocate interventionism? There are two reasons for doing so. First, as Murray Rothbard has pointed out, a strategy aimed at restoring liberty in the real world “must fuse together the abstract and the concrete; it must not simply attack elites in the abstract, but must focus specifically on the existing statist system, on those who right now constitute the ruling classes.” And, right now, as I mentioned above, progressivism is the prevailing ideology of our age. It permeates the thinking of our ruling class while providing intellectual cover for their looting and oppression of the producers. Thus, we cannot be satisfied with merely an abstract economic analysis that points out the plethora of inefficiencies, misallocations, and monopoly and inflationary gains and losses that interventionism imposes on a hypothetical economy. If economic theory is to be more than a parlor game, then it must be used as a weapon in the war to defend and advance liberty. We must use both economic truth and historical insight to expose the concrete groups that benefit from specific, real-world interventions and to awaken the much larger group of producers to their victimization by these interventions.

This brings me to the second reason for emphasizing the relationship between interventionism and the ideology of progressivism. For progressivism is far more than an economic program for the here and now. The core belief of progressives is the myth that history is an inevitable progress toward an egalitarian socialist state. Unlike traditional Marxists, however, progressives believe that history unfolds not through class struggle and bloody revolution but through the relentless march of democracy. A further departure from orthodox Marxism, as Rothbard points out, is that modern progressives have come to “realize that it is far better for the socialist State to retain the capitalists and a truncated market economy, to be regulated, confined, controlled, and subject to the commands of the State.” The progressive vision is “not ‘class war’ but a kind of ‘class harmony,’​ in which the capitalists and market are forced to work and slave for the good of ‘society’ and of the parasitic State apparatus.”

Despite these superficial deviations, progressives are Marxist to the core because they fervently believe in the Enlightenment myth of inevitable progress toward an ideal society. Therefore, as Rothbard points out, progressivism is “‘religion’ in the deepest sense, held on faith: the view that the inevitable goal of history is a perfect world, an egalitarian socialist world, a Kingdom of God on Earth.” And because progressivism is a religion, it will take what Rothbard calls a “religious war” to combat and defeat it once and for all. Not only must the war against progressivism be fought with a religious fervor, but it must also be, in Rothbard’s words, “openly and gloriously reactionary.” In other words, it must aim at taking back or recovering what has been stolen. The oppressed and exploited will not storm the barricades to take back “liberty” or the “free market” in the abstract, but they will fight to recover the visible, concrete fruits of liberty and a free economy. They want their schools, movies, workplaces, and urban downtowns back. The war of reaction must, therefore, involve a broad-based and unrelenting attack on all progressive doctrines, not only economic and political but also cultural, educational, religious, linguistic, therapeutic, biological, etc. All political and social norms and taboos inflicted on society by progressives must be ruthlessly exposed and ridiculed, and mercilessly crushed. The leftist long march through institutions must not only be turned back but turned into a full-on rout. The Great Reaction must completely displace the Great Reset and cast progressivism into the dustbin of history.

To conclude, in the war against progressivism, the theory of interventionism has a crucial role to play because, at bottom, it is the theory of who is ripping off whom, who is being enriched and who is impoverished by government policies. When combined with historical insight, the theory can pierce through the “false consciousness” of the productive classes that has been created by progressive ideology. It can open their eyes to the reality that they—the majority of society—are being ripped off and plundered by a ruling elite who is using its ill-gotten gains to control and oppress them and debase and destroy their cherished social institutions.

This address was given to the 2022 Rothbard Graduate Seminar.